The Doberman belongs to the utility dog breeds. Thanks to its intelligence and temperament, it is suitable for many dog sports, such as agility, obedience, VPG sports, or as a tracking dog. He is also used as a service dog by the police, customs and the German Armed Forces, as well as a rescue dog. The Doberman is also suitable as a therapy and guide dog for the blind. 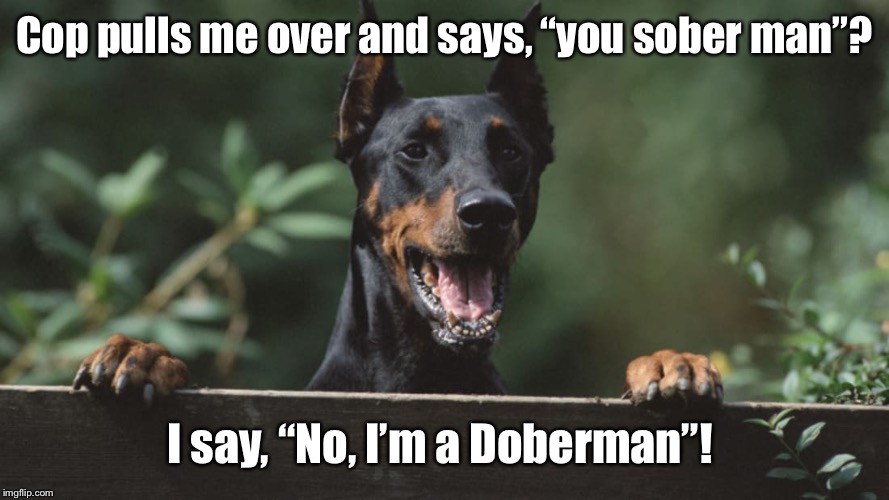 Check this funny and cute videos of doberman dogs. Hope you like it!

You won't be able to hide your grin when you see this sweet babies and playful dobermans play together. It's the cutest thing!

Very funny compilation of clips found on TikTok for any Doberman pinscher or simply dogs lovers. I really hope you enjoy and laugh as much as you can watching those clips...

This is a long videoabout our favorite dog, but very entertaining.

Smartest dog in the world

This is a long videoabout our favorite dog, but very entertaining.

Tana the Doberman shows off some tricks

The basic mood of the Doberman is friendly peaceful, very affectionate in the family. A medium temperament and a medium sharpness are required. Furthermore, a medium stimulus threshold is required. With a good leadership and work joy of the Dobermanns is to be paid attention to efficiency, courage and hardness. With adapted attention to the environment, self-confidence and fearlessness are to be particularly emphasized. Translated with www.DeepL.com/Translator (free version)

Origin and history of Dobermans

The Dobermann got its name from its first known breeder, Friedrich Louis Dobermann (1834-1894), who came from Apolda. For breeding, he mated some particularly fearless, courageous dogs, among them his favorite bitch, the mouse-grey "Schnuppe", which was neither a shepherd dog nor a Pinscher and thus nothing more than a cross-breed product from the dog population existing around Apolda at that time. He mated this bitch with a Fleischerhund, a kind of forerunner of the Rottweiler, mixed with a kind of Schäferhund, which was found in Thuringia predominantly in black, with rust-red markings, furthermore still bastards from Pinscher and hunting dog races are to have been used as well as a Greyhound, in order to lend a slimmer line to the dog. Thus a utility, working and guard dog breed was created, which were not only alert, but also "man-proof yard and house dogs". They were used early as police dogs, which at that time led to the nickname "gendarme dogs". In hunting, they were mainly used to fight predatory game. During the two world wars, the Doberman was also used, especially in the German army, as a reporting dog, mine detection dog and ambulance dog. In addition, Dobermans were preferred service dogs in concentration camps, along with German Shepherds and Airedale Terriers. In November 2015, the FCI approved a new breed standard that (implementing an FCI requirement from 2010) no longer includes docking of ears and tail - ears and tail remain natural - and describes black and brown Dobermans each as a separate variety. The standard is valid from August 1, 2016. Already since 1986 the docking of the ears as well as since the end of the 90's of the tail in dogs born in Germany, is prohibited.